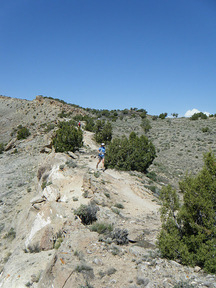 Marny is one of the most inspiring running I know. She runs in the mountains of Colorado, even in snow, even pregnant with her second child. She inspires me by doing what I still only dream of doing.

She has run four 50 mile ultra marathons and she has also done the race that is at the top of my bucket list: the Pikes Peak marathon.

At the time of this interview she was 4 months pregnant with her second child. She is also starting a dog running business.

Look at that running woman flying down the mountain slope. That's Marny! :)

When did you start running?

I have been running since I was 12 or 13. I started just before 8th grade track season.

What / who inspired you to be a runner?

My parents were runners so running was always in my life. They weren't competitive racers, but they both ran every morning. It was just part of the routine in my home!

Did you always run in the mountains?

Nope. I don't think I had ever run on a singletrack trail until I moved to Colorado Springs after graduating college. Even then, I mostly ran on the bike path, which is more of a dirt path than a trail.

I discovered true trail running after Jonas (my 4y/o) was born. It has only been in the last couple years that I really got into it. Now I pretty much exclusively run trails in the mountains and foothills. There are a lot to choose from in my town! 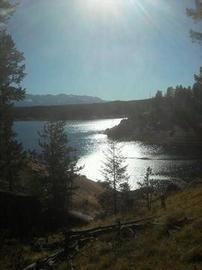 Did you run when you were pregnant w/ Jonas?

Yes. I ran well into the 3rd trimester. But it was very slow, easy running with lots of pee and walk breaks. And my mileage was pretty low. I switched to walking when those pesky contractions got in the way.

How is running going this pregnancy?

So far so good! I had a very lazy and unmotivated 1st trimester so it was a huge chore to get off my butt, but I always felt better when I did.

My weekly volume isn't big at all. I am running less than 30 miles per week. My goal is to maintain a weekly long run of about 2 hrs of trail running/hiking at a low level of intensity for as long as my body is comfortable with it. I want to maintain endurance and work on intensity after the baby is born. 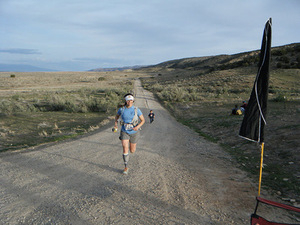 What made you want to run 50 miles?

I don't know! I guess I wanted to do it because everyone else was doing it. I'm a bit of a lemming I guess. I thought it would make me cooler. It didn't, but I'm glad I got into it. I absolutely love that distance! And no, if everyone were jumping off a bridge I wouldn't jump off a bridge too. Unless there was a really cool medal and tech shirt offered.

What made you want to run 50 miles again?

I wanted to redeem myself. I knew I could do better than I did in the first one. I was DFL female and I cried during the race. I actually went even slower the second time, but I had some good excuses. 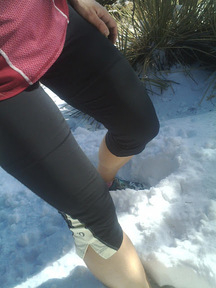 What was your weekly mileage like when you were training for a 50 miler?

I usually run around 65-70 miles and top out just over 80. It's not a lot compared to even a lot of marathoners, but those mostly singletrack runs in the mountains so the hours add up.

What advice can you give to a running woman who wants to run 50 miles?

Just go sign up for one. Preferably a cool scenic one. Don't worry about picking an "easy" course because none of them will seem easy after 30 or so miles. Just pick one with some good scenery. Make sure you have someone to drive you home and take care of you afterward. And figure out your nutrition before the race.

Continue on to part two of interview with inspiring running woman, Marny.